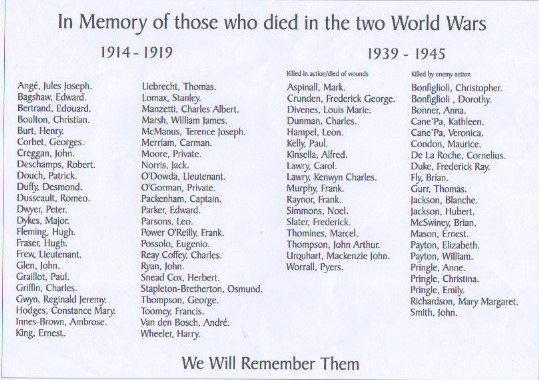 This slim record of some of those whose lives were lost in the two World Wars of the 20th century came about from an idea by Miss Joan Kennedy. Joan is a parishioner of Our Lady of Ransom in Eastbourne, and, until early 2018, was the parish archivist. In this role she had care of many different records of parish life. Eighteen years ago – in 2001 – Joan published a history of the parish to mark the millennium. It is entitled : “Our Lady of Ransom, in Gratitude and Hope.” In the course of writing this book she included a chapter on “The Parish at War.” In this chapter there is a list of names of those who died as a result of the two World Wars. It was her wish to turn this list on the printed page into a Memorial Board to be displayed inside the church. 2018 is the centenery of the Armistice which brought to an end the Great War. It seemed fitting that such a memorial board be produced for this anniversary.

Around about May of 2018 a notice appeared in the parish newsletter asking for a volunteer to take on this project – and I offered my services. In the course of pursuing this I found myself also taking on the role of parish archivist!

I undertook to inform the parish via the newsletter of the project and to invite parishioners to check the names on Joan’s original list to see if others should be added. Two further names emerged.

I wanted to cross-check all the names with other parish records as far as possible. I was intrigued to discover that the weekly notices given out by the priests at the end of Sunday Mass have all survived in book form since Victorian times. During the wars these notices include requests for prayers for those injured or wounded and those who had died – either in battle or by the result of bombing. The records of funerals were also checked – often the Latin word “subito” was written against a name as cause of death, meaning “sudden.”

Having satisfied myself that the names on our list were linked to Eastbourne – either directly by having lived here or with some family connection by marriage or, sadly, having died in one of the military hospitals, I set about having the Memorial Board made. This was during the summer of 2018. I was aware that a new memorial to all civilian fatalities in the Second World War had been produced and was displayed near the Wish Tower on the sea front. It is a handsome memorial. I was able to follow from this to the manufacturer of it – namely, “Hallmark, engraving and etching and signs Limited”, based at Piltdown, near Uckfield. They were very helpful indeed.

It then occurred to me that behind every name there was a story. Would it be possible to find out more about them? I set about this task by using Ancestry.uk – a family tree website – to search through more records, including military records. This led to other websites such as regimental histories. I added my own photos of headstones from local cemeteries and houses still standing where some of those mentioned lived. Further details and photos were received from other sources such as Downside School in Somerset who, very kindly, sent photographs regarding Terence McManus (First World War) and Brian McSwiney (Second World War). Searching back numbers of the local newspapers proved interesting but not as fruitful as I had hoped. Partly this was because – especially in the Second World War – press censorship was such that few specific details could be printed. Even the frequent bombing of Eastbourne was described as “a town on the South Coast was bombed” – as if to give the name of our town was somehow giving away a state secret!

All of this has enabled me to draw up short obituaries on a number of those mentioned on the Memorial Board. These can now be attached to the parish website as part of our parish archive. I hope you find this of interest. It can , hopefully, be used by others – including local schools.

This is an open-ended task because more information may be forthcoming. More information will always be gratefully received – and may be given in via the parish office. Thank you.

If it is Thy will that I should fall,
Then give me strength to bear this earthly pain.
That dying, I may die for Thee alone,
Or living, live to fight for Thee again.

The Corner in Terminus Road by M.E.Tabor.

It hasn’t a very romantic name,
It isn’t a place to stay,
It isn’t a place you would look at twice
In the ordinary way.
But it’s there today that the passers stop,
And hurrying feet are slowed,
Where the boys enlist at the corner shop
Down in Terminus Road.

For young men are leaving their sweethearts there,
And husbands leaving their wives.
They are giving the best they have to give,
Their youth, their health and their lives.
Like Britons each claiming to take his share
In bearing the country’s load.
Good-bye Piccadilly and Leicester Square,
We’re off to Terminus Road.

And what will there be in the years to come
When recruiting days are o’er?
Maybe a sixpenny halfpenny shop,
Maybe a Harrod’s store.
Whatever it is it will stand for me
As the place where England showed
That her sons are made of the right stuff yet,
Down in Terminus Road.

And it e’en may be that in years to come
The mothers will bring their boys
To the corner shop for peppermint creams,
Or sixpenny halfpenny toys.
And perchance, who knows? It will be theirs to tell
The victory England owed
To the Eastbourne lads who enlisted there
Down in Terminus Road.

About Us and Our Services